On June 11, Donald Trump casually referred to the Secret Service as the "S.S."

On June 18, we learned that Trump's re-election campaign was running ads featuring an inverted red triangle, which the Nazis used to identify political prisoners, liberals, and members of opposition parties. Trump's campaign ran 88 Facebook ads with the inverted red triangle in all 50 states before Facebook deleted the material for violating its policy against organized hate.

Today, Trump's campaign has been busted again. T-shirts for sale at shop.donaldjtrump.com feature an eagle logo which is extremely similar to the Nazi eagle. Also, the phrase "America First" was used by white supremacist and fascist groups in the 1930s. 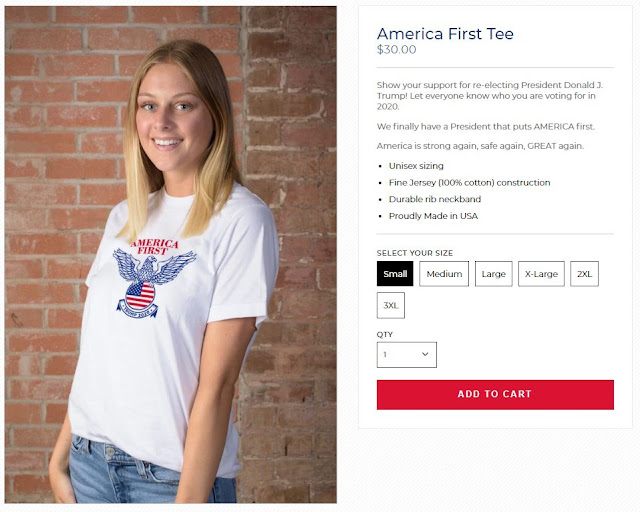 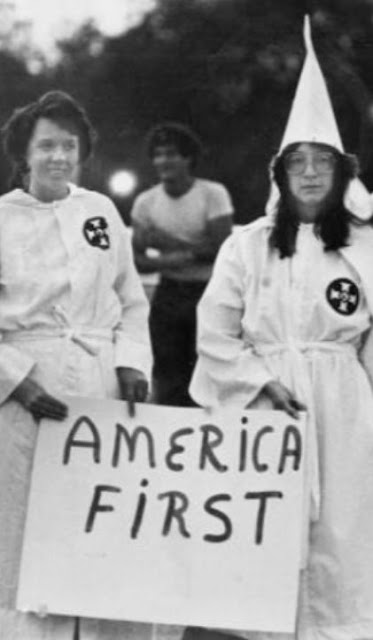 Burt Neuborne is the Norman Dorsen Professor of Civil Liberties at New York University School of Law and the founding legal director of the Brennan Center for Justice. From his book When at Times the Mob Is Swayed: A Citizen's Guide to Defending Our Republic:

Both Trump and Hitler intensified their assaults on objective truth by deriding scientific experts, especially academics who questioned Hitler's views on race or Trump's views on climate change, immigration, or economics. For both Trump and Hitler, the goal is (and was) to eviscerate the very idea of objective truth, turning everything into grist for a populist jury subject to manipulation by a master puppeteer. In both Trump's and Hitler's worlds, public opinion ultimate defines what is true and what is false. Trump's pathological penchant for repeatedly lying about his behavior can succeed only in a world where is supporters feel free to embrace Trump's "alternative facts" and treat his hyperbolic exaggerations as the gospel truth.

Once Hitler had delegitimized the mainstream media by a series of systemic attacks on its integrity, he constructed a fawning alternative mass media designed to reinforce his direct radio messages and enhance his personal power. Trump is following the same path, simultaneously launching bitter attacks on the mainstream press while embracing the so-called alt-right media, co-opting both Sinclair Broadcasting and the Rupert Murdoch-owned Fox Broadcasting Company as, essentially, a Trump Broadcasting Network.

Once Hitler had cemented his personal communications link with his base via free radios and a fawning media and had badly eroded the idea of objective truth, he reinforced his emotional bond with his base by holding a series of carefully orchestrated mass meetings dedicated to cementing his status as a charismatic leader, or Führer. The powerful personal bond nurtured by Trump's tweets and Fox's fawning is also systematically reinforced by periodic, carefully, orchestrated mass rallies, reinforcing Trump's insatiable narcissism and his status as a charismatic leader.

Hitler's strident appeals to the base invoked an extreme version of German nationalism, extolling a brilliant Germanic past and promising to restore Germany to its rightful place as a preeminent nation. Trump echoes Hitler's jingoistic appeal to ultranationalist fervor, extolling American exceptionalism right down to the slogan "Make America Great Again", a paraphrase of Hitler's promise to restore German greatness.