Trump Administration Ran Eight-Month Pandemic Simulation Less Than Three Months Before Covid-19 Appeared; After Report Showed US Was Woefully Underprepared, Not Properly Financed, And Poorly Coordinated, Trump Administration Ordered It "Not To Be Disclosed"

Beginning in January 2019 and continuing for eight months, the Trump administration conducted a scientific public health research study (code-named "Crimson Contagion") testing the United States' response to a potential global pandemic. The simulation was conducted in Washington, DC, and 12 states.

The final report (written in October 2019) concluded that the country was woefully underprepared, not properly financed, and poorly coordinated. The simulation created such chaos and confusion that the Trump administration ordered the report "not to be disclosed".

Roughly two months later, in January 2020, the Trump administration was briefed on what became the Covid-19 pandemic. 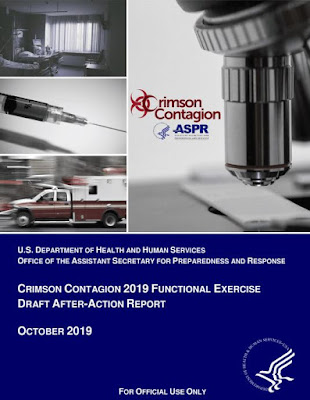 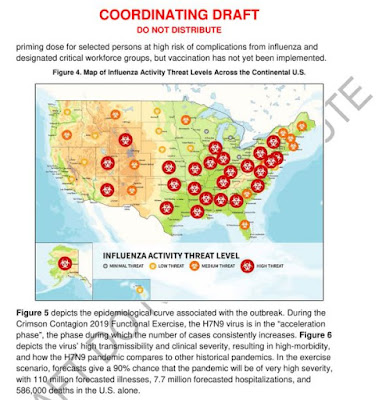 
What the scenario makes clear, however, is that [Trump's] own administration had already modeled a similar pandemic and understood its potential trajectory. ... [It] demonstrates that the government had considerable knowledge about the risks of a pandemic and accurately predicted the very types of problems Mr. Trump is now scrambling belatedly to address. The October 2019 report in particular documents that officials at the Departments of Homeland Security and Health and Human Services, and even at the White House's National Security Council, were aware of the potential for a respiratory virus outbreak originating in China to spread quickly to the United States and overwhelm the nation.

Among the report's key findings:


Currently, there are insufficient funding sources designated for the federal government to use in response to a severe influenza pandemic

State, local, tribal, and territorial partners were unclear on the kinds of information they needed to provide federal partners to address the full spectrum of community lifelines

The Times emphasizes that Congress was briefed in December 2019 on some of these findings, including the inability to quickly replenish certain medical supplies.

While the administration tried to keep this report a secret from the public, Trump was lying at a furious rate over the last two weeks:

March 17, 2020: "I've always known this is a real — this is a pandemic. I've felt it was a pandemic long before it was called a pandemic. ... I've always viewed it as very serious. There was no difference yesterday from days before."

March 19, 2020: "I would view it as something that just surprised the whole world. Nobody knew there'd be a pandemic or an epidemic of this proportion. Nobody has ever seen anything like this before."

These comments are remarkably similar to numerous statements made by George W. Bush and members of his administration after the attacks of September 11, 2001. And they are equally as false.

(When you lie constantly, as Trump does, it's impossible to keep track of what you've said. So on March 17, Trump says he always "felt it was a pandemic" and two days later insists that "nobody knew there'd be a pandemic".)

As Dara Brewton writes, the Trump administration "buried the data, and when the very real virus began to spread globally, Trump and his allies repeatedly dismissed concerns and shrugged it off as a hoax. They did this while knowing full well that they had concealed their own studies that concluded the dire risk of widespread fatalities. Americans are dying because our President deliberately ignored a national and global pandemic threat."

In addition to the eight-month study in 2019, Trump administration officials were given a comprehensive briefing just before the January 2017 inauguration by outgoing Obama administration officials about a possible pandemic. Also, the US intelligence community's report for 2019 warned that "that the United States and the world will remain vulnerable to the next flu pandemic or large-scale outbreak of a contagious disease that could lead to massive rates of death".

A US official with access to the intelligence reports said: "Donald Trump may not have been expecting this, but a lot of other people in the government were — they just couldn't get him to do anything about it."

Health and Human Services Secretary Alex Azar said officials had been first alerted to reports of the coronavirus on January 3, 2020. The warnings increased in volume toward the end of January and into early February.

(This surge in warnings coincided with Sen. Richard Burr (R-N.C.) selling dozens of stocks worth up to $1.72 million. As chairman of the Senate Intelligence Committee, Burr had access to virtually all of the highly-classified reports on the coronavirus.)


Inside the White House, Trump's advisers struggled to get him to take the virus seriously, according to multiple officials ...

Azar couldn't get through to Trump to speak with him about the virus until Jan. 18, according to two senior administration officials. When he reached Trump by phone, the president interjected to ask about vaping and when flavored vaping products would be back on the market ...

On Jan. 27, White House aides [tried] to get senior officials to pay more attention to the virus ... Joe Grogan, the head of the White House Domestic Policy Council, argued that the administration needed to take the virus seriously or it could cost the president his reelection, and that dealing with the virus was likely to dominate life in the United States for many months.

Mulvaney then began convening more regular meetings. In early briefings, however, officials said Trump was dismissive because he did not believe that the virus had spread widely throughout the United States. ...

But Trump resisted and continued to assure Americans that the coronavirus would never run rampant as it had in other countries. ...

Robert Kadlec, the assistant secretary for preparedness and response — who was joined by intelligence officials, including from the CIA — told committee members that the virus posed a "serious" threat ...

[Kadlec] said that to get ahead of the virus and blunt its effects, Americans would need to take actions that could disrupt their daily lives, the official said. "It was very alarming."

Trump's insistence on the contrary seemed to rest in his relationship with China's President Xi Jingping, whom Trump believed was providing him with reliable information ... Some of Trump's advisers told him that Beijing was not providing accurate numbers of people who were infected or who had died, according to administration officials. Rather than press China to be more forthcoming, Trump publicly praised its response.


One of Trump's favorite excuses is to claim that he was caught by surprise by the virus and that no one could have seen this coming. It turns out that US intelligence agencies saw it coming, and tried to warn Trump. The President ignored their warnings because he gets his intelligence briefings from watching Fox News.

The government should have been acting to prepare months before this virus arrived in the United States. The United States is in a public health crisis that could kill millions and cripple the economy because Donald Trump doesn't listen to US intelligence agencies.


The Crimson Contagion planning exercise run last year by the Department of Health and Human Services involved officials from 12 states and at least a dozen federal agencies. They included the Pentagon, the Department of Veterans Affairs and the National Security Council. Groups like the American Red Cross and American Nurses Association were invited to join, as were health insurance companies and major hospitals like the Mayo Clinic.

The war game-like exercise was overseen by Robert P. Kadlec, a former Air Force physician who has spent decades focused on biodefense issues. After stints on the Bush administration's Homeland Security Council and the staff of the Senate Intelligence Committee, he was appointed assistant secretary of Health and Human Services for Preparedness and Response. ...

The exercise played out in four separate stages, starting in January 2019. ...

Many of the moments during the tabletop exercise are now chillingly familiar.

In the fictional pandemic, as the virus spread quickly across the United States, the C.D.C. issued guidelines for social distancing, and many employees were told to work from home.

But federal and state officials struggled to identify which employees were essential and what equipment was needed to effectively work from home.

There also was confusion over how to handle school children. The C.D.C. recommended that states delay school openings - the exercise took place toward the end of the summer. But some school districts decided to go ahead with the start of school while others followed the federal advice, causing the same types of confusion and discrepancies that have marked the response to the coronavirus.

The exercise from last year then went on to predict how the situation on the ground in the United States would worsen as the weeks passed.

Confusion emerged as state governments began to turn in large numbers to Washington for help to address shortages of antiviral medications, personal protective equipment and ventilators. Then states started to submit requests to different branches of the federal government, leading to bureaucratic chaos.

Friction also emerged between the Federal Emergency Management Agency, which is traditionally in charge of disaster response, and the Department of Health and Human Services, another scenario playing out now.

But the problems were larger than bureaucratic snags. The United States, the organizers realized, did not have the means to quickly manufacture more essential medical equipment, supplies or medicines, including antiviral medications, needles, syringes, N95 respirators and ventilators, the agency concluded.

Congress was briefed in December on some of these findings, including the inability to quickly replenish certain medical supplies, given that much of the product comes from overseas.

These concerns turned more urgent at a hearing last Thursday on Capitol Hill, as lawmakers peppered officials with the Department of Health and Human Services with questions that sounded almost as if they had read the script from the fictional exercise, reflecting the shortage of respirators and protective gear.