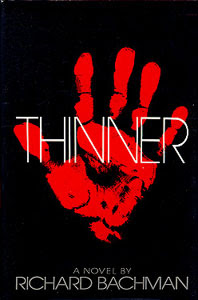 "You were starting to sound a little
like a Stephen King novel for awhile there ..."

In 1982, Stephen King finished a manuscript entitled Gypsy Pie, about Bill Halleck, an overweight lawyer who uses his connections in law enforcement and the courts to evade punishment for hitting and killing an old gypsy woman with his car. The gypsy family's patriarch puts a curse on Halleck, causing him to lose a couple of pounds every day.

Perhaps because of its bleak ending, King decided to publish the novel (retitled Thinner) under his pseudonym Richard Bachman. Each of the four previous Bachman novels – Rage, The Long Walk, Roadwork, and The Running Man – had been written very early in King's career. Thinner was different; it was a new manuscript. It was also the first Bachman book published in hard cover and the first to receive any real promotion. It was also the beginning of the end of Bachman's writing career.

On Halleck's way out of the courthouse, after the charge of vehicular manslaughter has been dismissed, he is approached by Taduz Lemke, the ancient gypsy. Lemke touches Halleck's cheek, and whispers one word: "Thinner". Halleck gives little thought to this encounter.

When Halleck begins losing weight, both he and his wife, Heidi, are thrilled. But as it continues – and Halleck loses 30 pounds in only three weeks – they get concerned. Fearing cancer or some other serious malady, Halleck goes to his doctor. All tests are normal; nothing is wrong.

Halleck notices that even after binging on fattening food to counteract whatever is going on, he keeps losing weight at the same steady pace. He "realize[s] miserably that something has changed in his life, and not for the better".


[A]ll of this could be traced directly back to Heidi. It had been her fault, all of it. He had not asked her to do what she had done ... Yes, it had been her fault, but the old Gypsy hadn't known that, and so Halleck had received the curse and Halleck had not lost a grand total of sixty-one pounds, and there she sat ... The old Gypsy hadn't touched her.

Halleck has a flash of "crude and unalloyed hate" towards his wife. He feels an initial shame, but in the days and weeks that follow, that rough hate returns more and more often, despite his attempts to stop it.

Halleck comes to accept what both his wife and his doctor - the voice of rational thought - believe is impossible. Halleck "suddenly, simply believed ... everything. The Gypsy had cursed him, yes, but it wasn't cancer; cancer would have been too kind and too quick. It was something else, and the unfolding had only begun."

Halleck's weigh continues to drop: 188, 176, 167, 155, 137, 130 ... and he is now so thin that he is drawing looks in the street and strangers are avoiding him. He contacts the police chief and the judge in his case and finds that they, too, have been cursed. The judge's skin is slowly morphing into reptile-like scales and the police chief has an extremely gruesome outbreak of full-body acne. Both men eventually commit suicide.

As Halleck wastes away, he realizes that he has to find the gypsies and make amends, if possible. He wants to tell Lemke there was no evil intent in his actions. He wants to apologize. Before he leaves, Halleck writes a letter to his wife:


It's easy to blame, easy to want revenge. But when you look at things closely, you start to see that every event is locked onto every other event; that sometimes things happen just because they happen. None of us like to think that is so, because then we can never strike out at someone to ease the pain; we have to find another way, and none of the other ways are so simple, so satisfying.

Halleck tracks the gypsies up the east coast, through New Hampshire and into Maine. When talking to the family accomplishes nothing, Halleck contacts Richie Ginelli, a mobster for whom Halleck's law firm has done some work. Ginelli is glad to help out a friend, and he begins several nights of terror against the gypsies in an attempt to get Lemke to lift the curse.

As with many of King's books, the idea came from personal experience:


I used to weigh 236 pounds, and I smoked heavily. I went to see a doctor. He said: "Listen man, your triglycerides are really high. In case you haven't noticed it, you've entered heart attack country." That line is in the book. He told me that I should quit smoking and lose some weight. I got pissed and spent a very angry weekend off by myself. I thought about it, thought about how shitty they were to make me do all these terrible things to save my life. I went and lost the weight, and pretty much quit smoking. Once the weight actually started to come off, I began to realize that I was attached to it somehow, that I didn't really want to lose it. I began to think about what would happen if somebody started to lose weight and couldn't stop. It was a pretty serious situation, at first. Then I remembered all the things I did when I weighed a lot. I had a paranoid conviction that the scales weighed heavy, no matter what. I would refuse to weigh myself, except in the morning, and then after I had taken off all my clothes. I remember being so pissed off in the doctor's office, because he wouldn't let me take off my clothes and take a shit before I got up on the goddam scales. It was so existential that the humor crept in after awhile.

In Thinner, King considers blame and its consequences. How should the blame for Susanna Lemke's death be apportioned? And what is the proper punishment?

No one accepts any responsibility for what has happened. Halleck blames his wife. Heidi refuses to blame herself. Taduz Lemke refuses to acknowledge that his daughter was careless in walking into traffic. The judge's wife blames Halleck for his condition: "Why did you have to hit her, you bastard? Why did you have to bring it on all of us?"

The entire group of gypsies are also being blamed, in a general sense, for being who they are. They are outsiders everywhere they go. When Heidi sees them in the town common before a summer concert, she says bluntly: "Keep your distance. They're all crooks." The gypsies are harassed by the local police for "trespassing" on the common. But don't common areas in a town exist to be enjoyed by everyone? Or can the police selectively choose who is allowed to use public land? In Thinner, communalism collides with human nature, and its myriad prejudices: isolationism, racism, and xenophobia.


The Gypsies had been rousted because they had no permit to perform on the common. But of course they would have understood that the message was somewhat broader than that. If you wanted Gypsy folk out, there were plenty of ordinances. Vagrancy. Public nuisance. Spitting on the sidewalk. You name it.

Later that night, Halleck's teenaged daughter, Linda, asks why the police were bothering the gypsies. "I thought the common was public property ... That's what we learned in school."

Anthony Chase, in "The Mass Culture of Property" (Loyola of Los Angeles Law Review, 2007), writes that Halleck responds "to a series of shrewd questions from his daughter in good lawyerly fashion – trying to give moderately truthful if highly selective answers".

Halleck knows from his own experience with his mother that children never forgive their parents for certain lies, but he cannot help himself in this case. "It had taken having a child to teach him just how tiring honesty could be." Halleck counts his lies in his mind as he tells them, and he also thinks of various legal precedents that would support the gypsies. Chase finds it "peculiarly satisfying to find a popular storyteller like Stephen King unleashing the hard legal history in a thriller that, in a real sense, turns on questions about access to civil justice".

Chase, on Thinner's discussion of "the politics of property rights":


The juxtaposition of these two property notions – that private ownership should remain unrestrained in the name of individualism and liberty versus the conviction that society will always retain a legitimate claim upon private property, an enduring and legitimate capacity to publicly regulate private wealth and power – may not come any sharper in popular culture than it does in Stephen King's morality tale, Thinner.

Access to justice and class consciousness are two other themes. Halleck avoids punishment for his negligence because of his connections, while the gypsies are denied any justice for the avoidable death of a family member. Late in the book, Taduz Lemke tells Halleck:


You run my daught' over in the road, white man. ... Hey, I known who done what. I taken care of it. Mostly we turn and we drive out of town. Mostly, yeah, we do dat. But sometimes we get our justice. ... Justice ain't bringing the dead back, white man. Justice is justice.

Thinner was the book that eventually exposed King as the man behind Richard Bachman. I'll detail that in a future post. King has said that if his cover had not been blown, Misery would likely have been the next Richard Bachman book.

I really enjoyed this post, from my enduring interest in Gypsy/Romany people to the riffs on property, and competing concepts of justice.

The curse is justice as revenge - an evening of the scales, weighed by the wronged party.

As you know, I recently re-read a book about curses and redemption, Louis Sachar's "Holes". In that vision of justice, curses and revenge must be exorcised, so that people can find a higher form of justice: redemption.

And finally, people committing suicide because of hideous, progressive, and unstoppable physical conditions is almost too awful to contemplate. What happens to the main character? Does he waste away and die?

What happens to the main character? Does he waste away and die?

Didn't think I should give away the endings of these books. ... He does not waste away, though.