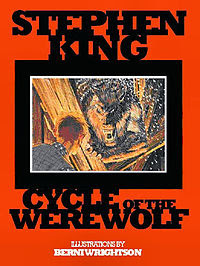 These are uncomfortable times in the small town of Tarker's Mills, Maine.

A killer has been stalking the town, coming out of hiding each time the moon is full. It starts during a January blizzard as railroad worker Arnie Westrum is mauled to death under a snow-choked sky.

In March, before a nameless drifter is killed, several townspeople hear howls and groans - "lonely and savage" - that sound almost like human words. Rumours arise that it is actually some sort of wolf-man doing the killing. The murders continue for six months.

The town council, fearing another attack by the Full Moon Killer, cancels the annual Fourth of July fireworks show. Ten-year-old Marty Coslaw (who uses a wheelchair) is devastated. However, his Uncle Al - the only member of his family that treats him like a regular boy - slips Marty some fireworks of his own and tells him to have his own personal celebration. That night, after everyone has gone to asleep, Marty wheels out into the front yard and sets off a few twizzers.

Suddenly, the werewolf - seven feet tall, with eyes glaring like green lamps - appears out of the bushes. Marty quickly lights a bunch of small firecrackers and throws it at the beast. The injured werewolf flees into the night and Marty's parents, believing the boy has been traumatized by the incident, send him off to stay with relatives in Vermont.

In the meantime, Constable Neary holds court at the barber shop, explaining his theory that the killer is probably someone with a split personality, "what I'd call fucking schizos". No one pays too much attention to the telling detail Marty supplied, that the firecrackers had most likely put out the werewolf's left eye.

When Marty returns home in the fall - as groups of men head out on hunting expeditions, looking for the beast (though most use it as an easy excuse to go off in the woods and get drunk) - Marty believes that whoever the werewolf is during the daytime, that person will likely be wearing an eyepatch. While trick-or-treating on Halloween, Marty finds encounters someone wearing a left-eye patch, and sees "some vital similarity in this man's human face to the snarling face of the animal". Back home, Marty has to think hard about what to do with this "scary, almost unbelievable knowledge".

The Cycle of the Werewolf is a short book (128 pages), with illustrations by Berni Wrightson. The original idea for the collaboration was a calendar - but King ended up writing much more than little vignettes, so the project turned into a short book with twelve chapters.

As he did in Christine, King explores the idea of the split personality, of a battle of good and evil raging inside of one individual. This person is a pillar of the community and a religious man, and he ends up rationalizing his murderous behaviour: "I do good here, and if I sometimes do evil, why, men have done evil before me; evil also serves the will of God, or so the book of Job teaches us; if I have been cursed by Outside, then God will bring me down in His time."

The town of Tarker's Mills, much like Jerusalem's Lot, has a seamy side hidden beneath its pastoral exterior: spousal abuse (a man who finds his wife's pain "more amusing than anything"), alcoholism, infidelity. "[T]he town can be a dark place. ... The town keeps its secrets." And, again, it is a child that appears most rational amid the bumbling adults, Marty's patronizing father, and the bumpkin constable.

The Cycle of the Werewolf is an enjoyable little tale, nothing overly suspenseful or truly horrifying, and the ending was satisfying, if a bit pat. (It was made into the movie Silver Bullet in 1985.)

Not liking "The Body" as much as I want to, though.