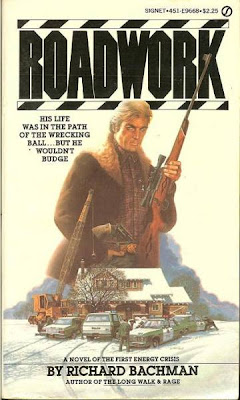 "What he did later he did with no conscious thought of the future or consequences."

Roadwork is a bleak, dark tale of a man grieving over his dead son, abdicating his responsibilities, and impotently fighting back against impersonal forces far beyond his control. It is thick with despair and depression, and a brittle, black humour. It was published in paperback in March 1981 as Richard Bachman's third novel.

Like King's other works of the period, there is also paranoia regarding the government, a loss of faith in civilization, and the casual dehumanization of the individual set against a society that is (allegedly) progressing.

Bart Dawes, 40 years old, cannot accept the finality of the news that his city is building a highway extension, the path of which will go through both his place of employment and the home he shares with his wife, Mary. Their son, Charlie, died of a brain tumour three years ago.

Unbeknownst to Mary, Bart has refused to find another home and, as the man in middle management charged with finding a new facility for the Blue Ribbon Laundry, he has sabotaged that relocation project, too. He quits before he can be fired. When she finds out about his now-former job, Mary moves out and considers filing for divorce. Bart begins drinking, spending his nights driving aimlessly, and plotting his revenge on the city. Very early in the book, it becomes obvious that there is only one way this story can end, but it's a testament to King's superb narrative skills - and his ability to burrow deep inside Dawes's mind - that the book remains suspenseful.

"I lost my wife and my job because either the world has gone crazy or I have."

Dawes's course of action seems pre-determined. Even Dawes realizes this, saying he gets the feeling "from time to time that I'm a character in some bad writer's book and he's already decided how things are going to turn out and why".

Losing his house would mean losing the memories he has of his son. This was the house in which Charlie was raised, in which he took his first steps. Allowing the city to tear it down would be tantamount to experiencing his son's death all over again. Mary seems to have made peace with the fact of Charlie's death, but Bart has not. The wound is still raw. One blogger noted that Dawes is "a man with nothing but memories of things he no longer has".

"There was no good place to make your stand in the world."

Bart feels his entire life is being ripped from its moorings. His workplace will be destroyed, his house will fall under the wrecking ball, and his neighbours have been scattered to other parts of the city. He refuses to accept it, though he has little idea of the "why" behind his actions. His only recourse is to go out on his own terms, not those of the city.


[Roadwork] was written [in 1974] between 'Salem's Lot and The Shining, and was an effort to write a "straight" novel. (I was also young enough in those days to worry about that casual cocktail party question, "Yes, but when are you going to do something serious?") I think it was also an effort to make some sense of my mother's painful death the year before - a lingering cancer had taken her off inch by painful inch. Following this death I was left both grieving and shaken by the apparent senselessness of it all. I suspect Roadwork is probably the worst of the lot simply because it tries so hard to be good and to find some answers to the conundrum of human pain.

In the second introduction, however, published 11 years later, King called Roadwork his favourite of the four Bachman books. (King's mother's death also led to the short story "The Woman In the Room" (Night Shift).)

"You can't always understand something just because you did it."

There are supposedly references in the Bachman novels that give clues as to who the actual author is. I found these in Roadwork:

There is a reference to multiplex movie theaters: Cinema II, Cinema III ... Cinema MCMXLVII. King was born in 1947.

Next: Danse Macabre.
Posted by allan at 6:59 AM

that I'm a character in some bad writer's book and he's already decided how things are going to turn out and why.

Nice touch, being a character in a bad writer's book.

ROADWORK is the only Bachman book I haven't read, but after reading this review I'm gonna have to give it a go.

Loving all these King reviews!