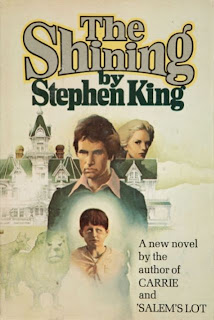 "The past is a ghost which haunts our present lives constantly."
Stephen King

"The past is never dead. It's not even past."
William Faulkner

Jack Torrance, a recovering alcoholic and writer, has been fired from his teaching position at a Vermont prep school for assaulting a student. He accepts a job as the winter caretaker at a remote Colorado resort, thinking the time alone will help him finish the play he is working on. Jack, his wife Wendy, and their five-year-old son Danny move into the 110-room hotel just as it is closing for the winter.

Danny has certain clairvoyant abilities - he can read people's thoughts or see scenes from the future. This ability is referred to as the shine or the shining by the Overlook's chef, Dick Hallorann, who has similar abilities. Soon after the Torrances move in, Danny senses the menace of the hotel almost immediately, and begins experiencing terrifying premonitions, visions, and messages. The hotel - "a palimpsest of fantasies and atrocities" (Fisher) , a metaphor for American society's embrace of violence, corruption, alcohol, and debauchery - is literally coming to life, drawing strength from Danny's powers.

When Jack abandons his writing project, he becomes more vulnerable to the hotel's suggestive influence that he sacrifice his son, and becomes increasingly unstable. He begins to hallucinate, conducting full conversations with ghosts from the hotel's past (echoing Danny's clairvoyant trances and his imaginary friend, Tony), and has increasingly strong thoughts of murdering his family. As Jack nears the breaking point, Danny telepathically urges Hallorann to return before Jack can fulfill his violent impulses.

In August 1974, King and his family moved from Maine to Boulder, Colorado, as King hoped for some new inspiration and a new setting for his next novel. He had begun work on The House on Value Street, inspired by the Patty Hearst kidnapping. "I was convinced that the only way anybody ever could really understand the whole Hearst case was to lie about it." The work was not going well, however, so he and his wife took a short vacation at the Stanley Hotel, in Estes Park. They were given Room 217.


We were the only guests as it turned out; the following day they were going to close the place down for the winter. Wandering through its corridors, I thought that it seemed to be the perfect - maybe the archetypal - setting for a ghost story. ...

That night I dreamed of my three-year-old son running through the corridors, looking back over his shoulder, eyes wide, screaming. He was being chased by a fire-hose. I woke up with a tremendous jerk, sweating all over, within an inch of falling out of bed. I got up, lit a cigarette, sat in a chair looking out the window at the Rockies, and by the time the cigarette was done, I had the bones of the book firmly set in my mind.


For much of the three or four months it took me to write the first draft of the novel I was calling The Shine, I seemed to be back in that trailer in Hermon, Maine, with no company but the buzzing sound of the snowmobiles and my own fears, fears that my chance to be a writer had come and gone, fears that I had gotten into a teaching job that was completely wrong for me, fears most of all that my marriage was edging onto marshy ground and there might be quicksand any place ahead. ...

Sometimes you confess. You always hide what you're confessing to. That's one of the reasons why you make up the story. ... [T]he protagonist of The Shining is a man who has broken his son's arm, who has a history of child beating, who is beaten himself. And as a young father with two children, I was horrified by my occasional feelings of real antagonism toward my children. Won't you ever stop? Won't you ever go to bed? ... So when I wrote this book I wrote a lot of that down and tried to get it out of my system, but it was also a confession. Yes, there are times when I felt very angry toward my children and have even felt as though I could hurt them. ...

I had written The Shining without realizing that I was writing about myself. I've never been the most self-analytical person in the world. People often ask me to parse out meaning from my stories, to relate them back to my life. While I've never denied that they ... have some relationship to my life, I'm always puzzled to realize years later that in some ways I was delineating my own problems, and performing a kind of self-psychoanalysis.

Jack Torrance is haunted by the past - his termination from the Vermont prep school is why he is semi-forced to take this winter job - and terrified that it will doom his future. His father was an abusive drunk who beat his wife and children, and while Jack is a recovering alcoholic, he wants to be a good father and husband, and meet the expectations of a "breadwinner" in modern society; he is working at controlling his darker side. But he cannot escape the past. He discovers boxes and boxes of old receipts and ledgers and newspaper clippings about the hotel in the basement. He becomes disgusted with, and soon abandons, his play (the future of his writing career) and immerses himself in the Overlook's past. King leaves the narrative open so that we are never clear if Jack's decision is made freely or whether the hotel is subtly controlling him. As Jack absorbs (and is absorbed) by the hotel, he begins to rationalize, and then emulate his father's abusive behaviour.

There is a strong theme of repetition in The Shining. Jack seems doomed to repeat the sins of his father (as those threats and insults he heard as a child reverberate over and over in his head). His wife Wendy is worried about adopting the harmful aspects of her mother's personality. Will Jack repeat the familial slaughter committed by the previous caretaker? There is also a certain sameness to the Torrances' daily routine at the Overlook. And King himself returns to certain descriptive phrases and metaphors, seemingly re-using them deliberately: dead aspen leaves, Jack wiping his lips with a handkerchief, wasps, puffs of dust or plaster, the batwing doors of the hotel's bar, the near-mist of an alcoholic's breath, masks and unmasking.

One repeated refrain is "An inhuman place creates human monsters." King offers an opinion on how inhumane surroundings - an abusive household, poverty - can warp even the most well-adjusted mind. And as was the case with 'Salem's Lot, there is a streak of anti-capitalism in The Shining. The Overlook was once owned by a reclusive Howard Hughes-like millionaire and the resort has hosted several presidents, influential corporate businessmen, and mob bosses throughout its decades. The clear evilness of the hotel and its voracious need to consume its guests (and tear families apart while doing so) is a metaphor for capitalism's single-minded profit motive, for a society run amok.

The Shining was heavily influenced by Shirley Jackson's The Haunting of Hill House (as was 'Salem's Lot), Edgar Allan Poe's The Masque of the Red Death and The Fall of the House of Usher, and Robert Marasco's Burnt Offerings. The novel has also often been compared to Guy de Maupassant's story "The Inn".

King has also spoken of his fascination with Joseph Campbell's The Hero With A Thousand Faces. In that book, Campbell writes that "the first encounter of the hero-journey is with a protective figure (often an old crone or old man) who provides the adventurer with amulets against the dragon forces he is about to pass. ... Not infrequently, the supernatural helper is masculine in form." In this case, Hallorann warns Danny about the possible dangers of the hotel, and says he should send word to him if there is any trouble.

During a Q&A in Toronto in November 2009, King announced that he would be writing a sequel to The Shining.


In King's still tentative plan for the novel, Danny is now 40 years old and living in upstate New York, where he works as the equivalent of an orderly at a hospice for the terminally ill. Danny's real job is to visit with patients who are just about to pass on to the other side, and to help them make that journey with the aid of his mysterious powers. Danny also has a sideline in betting on the horses, a trick he learned from his buddy Dick Hallorann.

A later report states that a traveling group of vampires called The Tribe is also somehow involved in the story. The novel is entitled Dr. Sleep and is scheduled to be published in 2013. King reads from the work-in-progress here.

It's interesting (to me) that I know almost all the influences you mentioned - Shirley Jackson, Poe, Guy de Maupaussant - but have not read this book.

I like the theme of repetition, too. We can relate that to what so many people say about writing: get into a routine and write every day.

I wonder how anyone can read The Shining now without having Jack Nicholson's performance in their mind. There were other very memorable visuals from the movie, too.

I think the first thing you have to do if you are reading the book is forget the movie. I can't really remember it, but apparently Nicholson piles on the crazy way more than is needed, especially early on.

"I think the first thing you have to do if you are reading the book is forget the movie."

It's a pretty memorable movie. Not sure how I would go about forgetting it.

Yeah, I've got memory burn on The Shining. Will have to wait till I have full-blown dementia to read the book.

Hey Allan, have you thought about doing some kind of study/list on Red Sox players in King books, and which ones made it into the films? Like, in the Shining movie, you can tell it's a Yaz bat Nicholson has, but they don't say it. I gotta assume this was specified in the book. And in Needful Things, there was a Ted Williams baseball card that was terribly changed to a Mickey Mantle one for the film. Will there one day be a movie called "The Girl Who Loved Tanyon Sturtze"? And on and on.

I know you guys have talked about baseball scenes in novels, but I'm talking specifically King.

I was listing mentions of the Red Sox, but I stopped. Easy enough to start it up again, though. In 'Salem's Lot, he mentions Doug Griffin, but spells it wrong. (Maybe because there is a family called Griffen in the book.)

I vote for Start it up again.

Pet Sematary has a lot of listening to the Sox on the radio.

I suspect The Shining is still kind of his masterpiece, but I'd have to reread it again.

If someone (like Laura) was only going to read one King novel, I would recommend it.